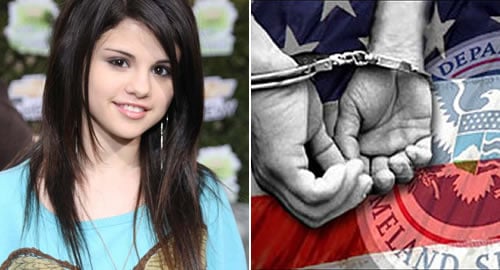 Pop sensation Selena Gomez was arrested in Arizona and has been deported, the associated press is reporting. The move comes just days after the state’s tough new immigration law came into effect.

According to a local official who wished to remain anonymous, Selena raised the suspicion of an Arizona State Trooper when she was spotted riding a donkey through a Home Depot parking lot with a cardboard sign reading “will work for churro.” When police questioned Selena, she was unable to provide proper documentation proving her citizenship. She was then arrested, booked and deported.

Several switchblades and three live chickens were found among Selena’s possessions. Police speculate that the birds were to be used in an illegal cock fight later that evening.

As an illegal immigrant to this country, I must protest this unjust, inhumane treatment. Citizens of Arizona should be ashamed of themselves. It’s been years since my student visa expired, but in that time I’ve become an active member of my community. Every month, the 1/3 of my disability check that I don’t send to Hamas is spent at local businesses, most of which are owned by my cousin Anwar. I have also become involved with local government, and recently started a petition that seeks to outlaw Christmas and require women over the age of eight to remain in their homes for the duration of their monthly mensuration.

As you can see, I am as American as apple pie. That’s why I say free Selena!