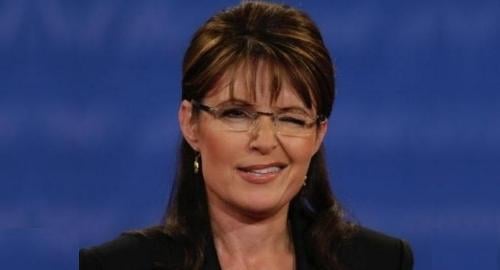 Now that Palin’s out as governor of Alaska the media focus has shifted to what she’s going to do next. Since we know Palin is an avid reader of CelebJihad, we have kindly decided to offer her five suggestions we feel would be in her best interests (and ours).

Waitress at Applebee’s
What better place to use your down-home folksy charm to squeeze a few extra bucks out of undersexed middle-aged men? Well, other than Dennis Hof’s BunnyRanch. But hooker jokes aside, if you don’t want David Letterman making fun of your morally loose daughters on late-night TV anymore, head down to your neighborhood Applebee’s and let speeded-out truck drivers do it instead.

Ambassador to North Korea
This works for several reasons. First of all, our nation doesn’t have one so there’s an opening (and it would create a job for our economy). Second, while the North Koreans think Hillary Clinton is a “funny lady” who looks like “a pensioner going shopping” even they would have to admit that Palin is a hottie and her campaign shopping bill proves that she shops at levels exponentially higher than a pensioner. So what’s the rub? Well, they also said Hillary is “by no means intelligent.” If that’s the case then they would probably rate Palin somewhere between a vegetable on life support and Paris Hilton (which, for the record, is an incredibly tight window of brain activity levels).

Broadway Actress
What would be better than a Broadway adaptation of Fargo? A Broadway adaptation of Fargo featuring Sarah Palin as Police Chief Marge Gunderson. Think about it. She’s already got the folksy accent and small town attitude. She could even get knocked up again for the part. And who wouldn’t want to hear Palin deliver the famous line, “Oh, I just think I’m gonna barf.” It would remind us all of the moment we heard she was selected as McCain’s running mate.

Director Biotech Life Sciences Sales, Mumbai India
She doesn’t like the direction this country is going? Well Sarah, you’re a ‘love it or leave it’ type, right? Here’s your chance to leave it. Sure, you’re massively under-qualified, but you’ve got an ‘it’ factor. You’ve got pizzazz. Give it a shot. Will we miss you? You betcha. But only for the easy jokes at your expense.

Presidential Candidate, 2012
African-Americans were delighted to see a black man soundly defeat and old white man in 2008, but that would be nothing compared to seeing it happen to a foxy white woman. Years ago this was a revenge fantasy only fulfilled in the world of pornography, but should the stars align, it could be a mere three years away. Keep the faith, my brothas!