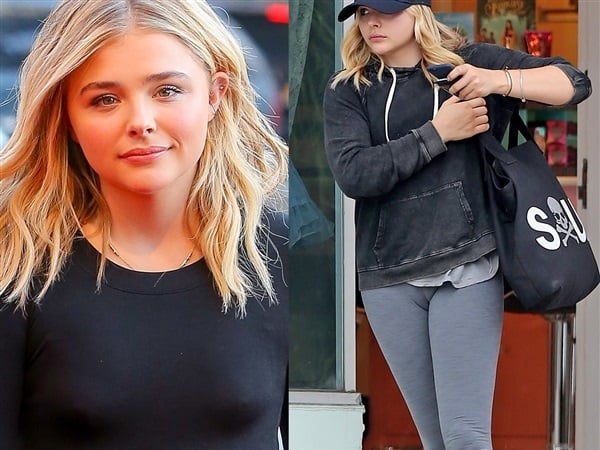 Chloe Grace Moretz flaunts her hard nipples and engorged camel toe in the disturbing photos below.

It is certainly hard to say which is worse, seeing Chloe’s erect tit toppers on her tiny little boobies, or seeing Chloe’s fat pussy lips bulging out the bottom of her leggings. However, what is for certain is that Chloe is the embodiment of Zionist controlled heathen Hollywood advancing the decline of infidel culture.

It wasn’t that long ago that the so-called blonde bombshell celebrity starlets promoted by the entertainment industry had tight bodies, big bountiful breasts, and kept there mouths shut unless they were talking about how much they enjoy sex. However, thanks to Hollywood embracing the liberal feminist body image ideals frumpy women with underdeveloped sex organs like Chloe Grace Moretz have now become the “new age sex symbols”. Not only is this new breed of stars a flabby mess, but they are also all “socially conscious”, which means that they are completely insufferable as they continually attempt to sound enlightened by prattling on about blasphemous gender identity and women’s issues.