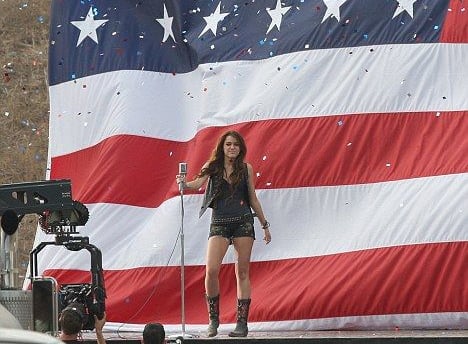 Miley Cyrus hates America, and she isn’t afraid to show it. The picture above shows Miley on the set of her new music video, “Party in the US.” Sources speculate that the “Party” in question is none other than the Socialist Workers Party, and that Miley may have become a member at the age of seven.

Just moments after the photo was taken, Miley reportedly dropped her shorts and pinched a brown loaf on top of the giant American flag, laughing manically as she smeared her feces all over the stars and stripes.

Other shocking scenes in the upcoming video allegedly include Miley taking medical supplies away from white seniors and redistributing them to minority children, a segment in which Miley berates all World War II veterans as war criminals, and bizarre homage to Dr. Strangelove in which Miley is seen waving a cowboy hat as she rides a plane into the South Tower of the World Trade Center.