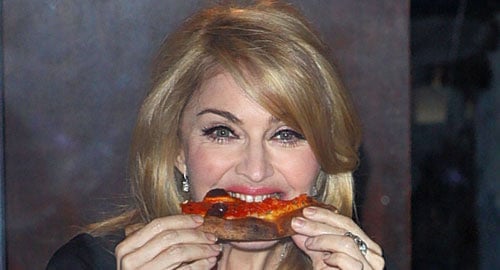 Madonna eating the leg of an adopted African child.

Madonna has put a lot of things in her mouth, but NYC Pizza isn’t one of them.

Apparently the pop star who is best known for acting like a whore and ruining the song American Pie has never gotten the urge to try New York’s signature dish, even though she’s lived in the damn city for over 30 years (although something tells us she’s had more than her share of NYC hot dogs…ZING!!!).

But David Letterman decided enough was enough, and took her next door for a slice. When Letterman asked what she liked on her pie, Madonna said, “That’s a very personal question.”

Get it! The old whore made a joke about her vagina! HAHHAHAHAH! Hilarious, Madonna! Still got it!