Jews Ruin Hitler for Everyone 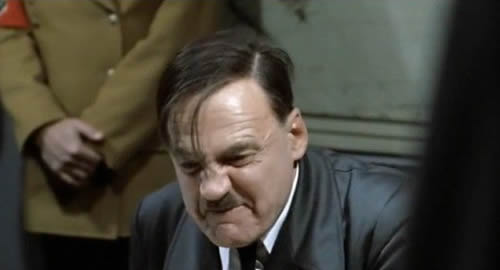 We here at CelebJihad have always said that the Zionists are trying to ruin everything. Now, more evidence has come to light. It seems the Jews have gone and ruined Hitler for everyone!

Constantin Film, the production company behind the Adolf Hitler film Downfall that spawned hundreds of Internet parodies, has removed all such videos from YouTube in response to Zionist threats from Jewish associations in Europe. Why European Jews would feel the need to go after Hitler is beyond me. What did Hitler ever do to them? This must be part of some money making plot that the Elders of Zion have cooked up.

And look how fast the media bows to their Zionist overlords. A few rabbis get upset, and the videos come down. But when Muslims make a calm, concise request for “South Park” to be more respectful to the Prophet Mohammad, they are vilified as murders and terrorists. This double standard is beyond outrageous. It makes me want to cut someone’s head off!

At least Hitler isn’t here to see this.