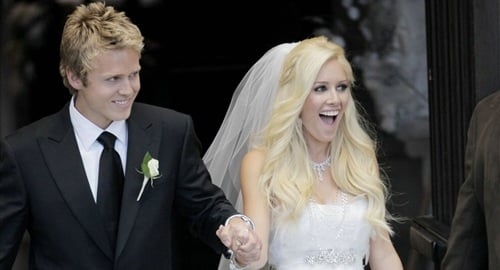 Let me spell it out for you people. I’ll type s-l-o-w-l-y. Heidi Montag and Spencer Pratt did NOT split up and they are NOT getting a divorce.

Oh I know they said they are “separating”, but I also have a normal number of chromosomes so I know an obvious publicity stunt when I see one.

Heidi and Spencer’s show “The Hills” gets canceled. Heidi announces she is leaving Spencer, and the very next day she announces that she is getting her own “reality” show on MTV. That doesn’t set off any red flags with you people?

I would bet my collection of goat testicles that Heidi’s show ends in a “cliff hanger” of her deciding whether or not to get back with Spencer. She of course will and the producers will hope that they have a strong enough “girl drama” storyline to carry the ratings through to a 2nd season.

All you stupid Americans who believe celebrity gossip are getting played. You need to open your mind to how the system works. How do you not notice that when actresses have movies coming out that they are suddenly photographed in a bikini spread eagle on a beach or having alleged passionate love affairs with actors who also just so happen to have movies coming out?

The majority of celebrity gossip is planted bullsh*t designed to get you consumed with celebrity lives so that they can sell you crap. Celeb Jihad will continue to expose the truth until you infidels realize that your Zionist masters in Hollywood are making fools out of you, and that there is no God but Allah and Muhammad is his prophet.