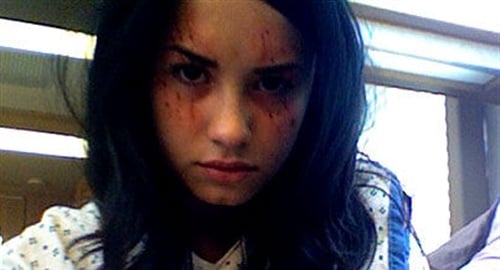 Teen Disney star and mental patient Demi Lovato has been making the rounds giving interviews to celeb magazines about what a crazy bitch she is.

“I never found out until I went into treatment that I was bipolar….Looking back it makes sense. There were times when I was so manic, I was writing seven songs in one night and I’d be up until 5:30 in the morning.”

Bipolar is just a fancy way of saying “bat shit insane”, and all of those songs she spent the night writing were complete gibberish. However, notice how Demi never says she is going to stop making music, so she obviously has not learned her lesson and is still a danger to society. She needs to be re-institutionalized immediately before she further inflicts us with her crazy.